It's My Birthday and I'll Cry If I Want To 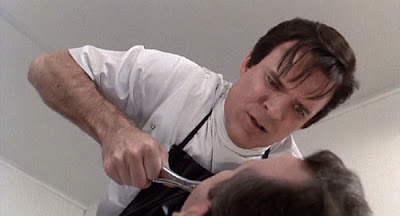 I obviously hate myself.

How else to explain my 9 am appointment at Dr. Low's office, on this sunny yet chilly late autumn morning, my 48th birthday?

Sylvia the dental hygienist was perfectly nice... as nice as one could be while sadistically scraping off plaque from the 18 months that had lapsed between today and my last dental appointment.

When I wryly remarked that this was a helluva way to spend my birthday, she praised me for doing something positive for my teeth as I was nearing 50 -- the age when people's teeth evidently start rotting or falling out.

And suggested that I buy myself the new Oral B electric toothbrush as a birthday gift.

So, yeah, it's my birthday and good wishes have come from near and far.

Middle Babe, in the final stretch of her semester at Rhodes University in South Africa sent me a BBM advising me to go for a birthday mani-pedi, massage and two-hour workout. SOBB (Sister of Bungalow Babe) in Jerusalem said she hoped I would enjoy some recreational shopping, seconding the suggestion of some personal grooming in honor of this special day.

POBB (parents of Bungalow Babe), whom I will see for dinner later today, called to express shock that their eldest child had reached such an advanced age. FOBB (father of Bungalow Babe), an ordained rabbi, informed me that his only association with the number 48 was a Midrashic rendering of the metaphysical 48 Gates of Impurity that the People of Israel had to pass through on their way to the Holy Land.

Big Babe, newly home from Berlin, regaled me with his LOUD rendition of Happy Birthday on the trumpet he taught himself to play while I attempted not to spill my coffee on myself. Little Babe sleepily wished me a "Happy Birthday" when I roused him from sleep, throwing warm arms around my neck and kissing me on my hair before I yelled at him to get dressed and downstairs in five minutes flat.

And HOBB presented me with the birthday gift he thoughtfully bought me this morning while out walking Alfie and Nala: a pound bag of Oren's Beowulf Blend coffee and a melange of celebrity and fashion magazines.

I tried to recall the taste of the Beowulf Blend, the blare of Big Babe's trumpet, the warmth of Little Babe's sleepy arms, the sweetness of Middle Babe's text messages and the relaxation of a pedicure as I lay helplessly in Dr. Low's chair, held hostage by a woman named Sylvia who hacked at my sensitive teeth, wielding instruments of gum destruction while a steady stream of my blood and saliva got slurped up by a loud vacuum device stuck into the side of my mouth.

My efforts were in vain. Every nerve of my being was marinating in a stew of misery.

It is now nearly 2:30 in the afternoon. Starting at 3:00, I've got two interviews to conduct and an hour-long phone conference at 4:00.

At 5:10, I need to leave to pick up Little Babe from Afterschool and then the Bungalow Family heads out to Queens to join POBB for my birthday dinner at an Israeli restaurant. It doesn't look like a mani-pedi, recreational shopping trip or massage is in the cards for today.

However, if I run out to Duane Reade in the next half hour, I'll be able to pick myself up a new Oral B electric toothbrush. Sylvia gave me a coupon for a $10 rebate for the Triumph model.

There is a new zeitgeist in America.

And not just politically.

The era of George, John, Bill, Sarah, Dick, Laura, Cindy and the rest of the prototypical American names has just drawn to a close.

A new era has dawned, bringing with it a wealth of new, poetic names from other lands and languages.

Barack: from the Hebrew baruch, or blessing. Also, Hebrew for lightening.
Rahm: Hebrew for mighty.

What was once foreign is now part of our national landscape.

To this American woman, possessed of a Hebrew name, there is reason to rejoice.

The lexicon and heart of our nation has just expanded, becoming greater, more blessed, more mighty.
Posted by Shira Dicker at 11:17 AM No comments:

The Triumph of Hope Over Fear 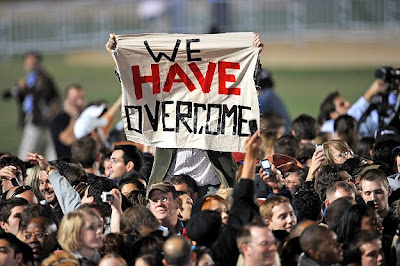 Her citizenry came through, turning out in record numbers at the polling stations in city and suburb, in red and blue states alike, throughout this great nation.

She pulled the lever as if with one hand, voting in Barack Obama to be her next president.

The modern-day Moses whose daunting task it is to lead this great nation out of the shackles of underachievement and towards our great destiny.

No one of this generation will ever forget the evening of November 4th, 2008, especially that electrifying moment when the race was called.

At my election night party on W106th Street we erupted into wild cheering as we stood around the television. "Wait...is this real? Can we trust this??" I asked my host, afraid to believe that yes, we did overcome.

Obama's victory set off the cheer that was heard around the world. In an instant, my far-flung family -- HOBB and Middle Babe in Grahamstown, South Africa, Big Babe in Berlin, Little Babe watching from our Columbia U apartment -- was united in real time.

Watching with his American friends in Berlin, Big Babe shot me a text: "He won!!!!!!" Little Babe called me on my cell. "Obama won!!!!" he shouted into my ear. And, as promised, I called HOBB on his cell though it was 5 am. Sleepily, my husband said, "Omigod!! Wow!!!!!Mazel Tov. Say a shehechiyanu."

The Jewish prayer that is recited at firsts.

The message of last night's historic victory is that hope is stronger than fear.

Blessed are you, O God, ruler of the world, for sustaining me and keeping me alive to witness the wondrous events of this day
Posted by Shira Dicker at 6:56 AM No comments:

The Sun'll Come Out Tomorrow

Shlipkes (noun): From the Yiddish, connoting nervous energy. On pins and needles; on the edge of one's seat. The feeling of being alive in America on Monday, November 3rd, 2008.

Optimism (noun): A positive attitude. A conviction that the glass is half-full. The belief that the sun'll come up tomorrow. Casting a vote for Barack Obama.

Barack Obama (proper noun): 21st century transformational leader. Visionary politician. Son of the American dream. Product of the great melting pot. Mighty symbol of transcendence for millions of Americans. Target of fear, suspicion and hatred for others. Black, white and all the colors of the rekindled promise of our nation.

The Future (noun): What is yet to be. The day after today. Tomorrow and tomorrow and tomorrow. Unknown but indications are strong for optimism. Still, there are shpilkes. These last hours are crazy-making. Our entire nation is on the edge of its collective seat. We need Barack Obama, oh how we need Barack Obama to lead us out of despair and into our glorious future.
Posted by Shira Dicker at 8:24 PM No comments: 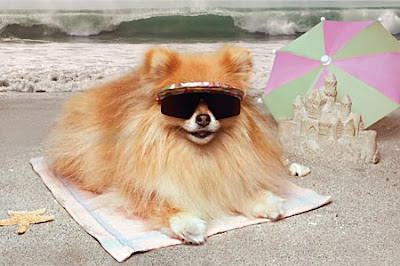 Because HOBB(Husband of Bungalow Babe) is visiting our beautiful daughter Middle Babe in South Africa (where she is spending a semester studying ethnomusicology), he was unable to respond in a timely fashion to the reporters from the NY Times who contacted him about Rashid Khalidi last week, via email.

So the piece went to press without his contribution and came out just fine. Appearing in the Friday paper it gave a reality check to the scariness factor of Khalidi, the latest bogeyman produced by the McCain campaign in an ever-more-desperate attempt to scare voters out of electing Obama as the first Secret Muslim-Terrorist-Non-American-Socialist-Israel-Hating President this week.

(Hey Sarah...did I leave anything out? Maybe leader of the pro-abortion movement that John mentioned in that last debate? Oooohh...how about Baby-Killing-Godless-Anti-American?)

Here is a snippet from HOBB's belated email response to the Times reporter about Khalidi, which he shared with me this morning:

i don't agree with his point of view, but he is a reasonable man worth hearing out. in fact, he came and gave a guest lecture in my "Covering Religion" seminar when i was focusing on Israel in 2006. He came and talked to my class? I guess I should never run for public office!

And it is that last sentence, of course, which is the crux of the issue. Would HOBB pass muster with the Guilt-by-Association police because of his own Khalidi konnection?

As I wrote in my last post, I am not stating that Rashid Khalidi is necessarily good news for the Jews but he is not an anti-Semite nor is he to be counted among those anti-Zionists who have called for the destruction of Israel.

He is pro-Palestinian and yes, has used some questionable language in talking about Israel. But that is not the point I wish to make.

The point is that Rashid Khalidi has NOTHING to do with Barack Obama's presidency.

And reasonable, honest people of all political persuasions know it.

And the further point is that the Shady Character Degree of Separation game has run its course.

In this presidential campaign and hopefully forever more.

And if you don't believe me, I invite you to play the game...with yourself.

Think of EVERY person you have EVER met in the course of your lifetime and make a list.

Then, put a scary red dot next to anyone who:

See where I'm going with this?

We deserve to be judged by our own words and deeds and wardrobe and haircuts, including the horrible ones from the seventies.

Judge me by my values and my policies. By my track record. By my writings, my legacy, my cooking, the music I listen to, the books I read, the impact I have made...just me, myself and I.

But please, please, please...do not confuse me with my old gynecologist who went to jail for molesting patients and my Anabaptist friend who believes that homosexuality is a sin or my former boyfriend's sister who was a bigamist or my Shabbat host who calls black people shvartzes, or the Rubashkin's chicken breast I bought three years ago before I knew what crooks the owners were or the rich right-winger who sends me emails telling me that if Obama is elected president, he will have homeless people sleeping on his living room floor and he works hard for his money and doesn't deserve to have to subsidize sub-humans who earn less than him, or my state governor who was paying big bucks for sex with hookers or anything else that is not remotely related to me.
Posted by Shira Dicker at 1:30 AM 1 comment: