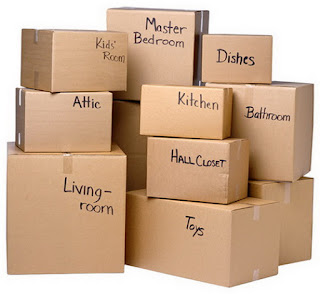 Tonight we reclaimed the living room and the dining room after more than two months of renovations that are not complete but at a standstill in the face of Passover. Our black and red leather couches -- covered by the coats that had been removed from our front hallway to allow access to the construction crew -- shyly reintroduced themselves to us in their naked glory. Our long wooden Ikea dining room table -- pushed up against the far wall -- reasserted herself in the middle of the room, stretching out luxuriously, like a cat or a princess or a beautiful woman posing for a master painter, nude and unashamed.


To achieve this transformation, the long, narrow Upper West Side corridor between Little Babe and Middle Babe's post-college bedroom was temporarily filled with the boxes, clothing and artifacts that had cluttered our two common living spaces.


We will deal with the hallway traffic after the holiday. Then, we will slowly unpack, weed out what is worthy and decide what to do with the rest.


Unless something is broken or heinous, I prefer to hang onto my possessions. In Manhattan, such a preference is a great liability.


Urban dweller though I am, my soul yearns for a sprawling home with an attic and a basement and too many closets to count. Returning my exiled coats to overly heavy coat hooks, squeezing dresses and blazers into closets that are stuffed like rush hour subway cars, I feel frustrated by the constraints of space in our apartment: the classic New Yorker's lament.

It is minutes past midnight and I think I screwed up the formatting
here by doing a copy 'n paste of Alicia Jo Rabin's picture but I
could not end the day without saluting the musical magnificence
of Girls in Trouble, the band that the beautiful Rabins formed
with adorable, scruffy-haired hubby Aaron Hartman.

While the spoken word aspect of the show was moving, the
music, performed between acts, was transcendent.

The songs. The lyrics. The visuals. The looping pedal. Rabin's
voice. Her glorious pregnant belly. Her synergy with Hartman.

Sitting in the audience, I felt feverish, breathless, as if I were
mortally ill or deeply, dangerously in love.

The band shared the stage with spoken word performers but
nothing held a candle to the ethereal, sophisticated, knowing
songs -- inspired by Biblical women -- that Alicia Jo Rabins sang.

As I prepare for sleep, I feel touched by magic, stirred by music,
awed, grateful, lucky.

I feel as if I have just discovered a new language or a new country
or am tasting a brand-new flavor, never before sampled.

I am touched by a close encounter of the musical kind. I am
different. Better. Closer to the angels.

Posted by Shira Dicker at 12:14 AM No comments: 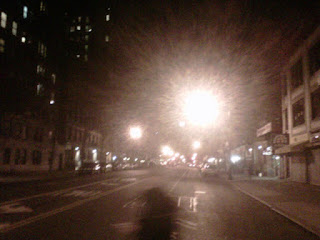 So my life is nuts. Chances are, if you live on this island, yours is too.

Which is why a big ass moon, flattish on the top like an elephant had just stepped on it, is a cool sight to see late on a Saturday night, coming back from a party, shivering from cold, tipsy on tequila.

This wonderfully robust yet table-topped moon presented itself to me as I was crossing W106th Street and Broadway. It made me pause and snap a photo.

It made me stop and take stock.

Though I am forever bemoaning the lack of balance in my life, things have been full, kinetic, exciting and unpredictable...in a good way.

Far from perfect but perfectly imperfect if I take a long, moon's-eye view of things.

I'm working very hard, several projects at once, partying hard, too. Purim was an epic adventure. I was lucky to be out of town last weekend and came back wearing a tan and clutching memories of walking in 80 degree sunshine. The Urban Bungalow is under construction, courtesy of Columbia U (our landlord) and now my room has electric blue walls, gorgeous wooden floors and a smooth ceiling and Little Babe's room is a musician/teen/man cave with similarly beautiful floors and freshly painted crimson walls. Middle Babe's room is a work-n-progress and our kitchen now has walls the color of an autumn sky.

My daughter just got the thrilling news that she was admitted into a grad program in Human Rights at Columbia for this fall. Big Babe, a resident of Berlin, has been a resourceful freelancer, with his coverage of the Berlinale (film festival) appearing in news venues large, small, local and international and his steady stream of thoughtful art and culture journalism. Little Babe and I have started to visit college campuses and are collaborating on a rock'n roll feature story for a well-known news site. He's studying for the SAT's. Distracted by music, given to playing guitar and bass at least six hours a day, he is attempting to hand in his schoolwork on time...or at least by the end of his junior year.

My frantic fear of culture deprivation has been assuaged as I've darkened the doorposts of several museums lately, catching extraordinary exhibitions. My post-J School quest to publish articles -- alongside my public relations projects -- is being rewarded, if slower than I would like. I realize that I've also managed to grab precious time together with friends; not all of them, by any means, but some. And real time, not virtual, although thank God for virtual forms of communication because that at least offers a bridge to people I love and do not see frequently enough.

Read more »
Posted by Shira Dicker at 8:28 AM No comments: