Don't Cry for Me, Mandy Patinkin 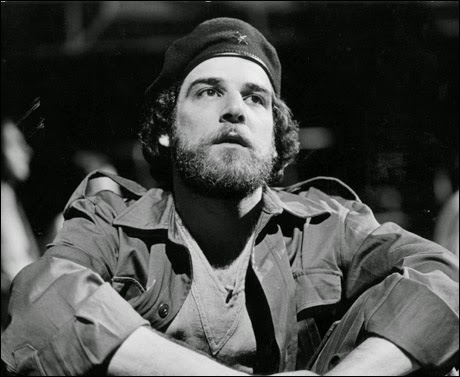 On the final Friday afternoon in November, Concord's Monument Square was congenially crowded with ruddy-cheeked, good-natured pedestrians arrayed in colorful outerwear, toting oversized holiday shopping bags, gracefully skirting the coconutty mounds of unsullied snow banking the sidewalks of the street leading up to the Colonial Inn, our destination, established in 1713.

We had arrived in the heart of this historic Massachusetts town with only a couple of hours until Shabbat, eager to track down food and local cultural offerings...not necessarily in that order. Stumbling into the hotels's reception area with my too-numerous bags and Manhattan black-on-black attire, I set about the task of finding out what was showing, playing or otherwise open that we would need to purchase tickets for before the 4:12 sundown.

One of the hallmarks of people like me who straddle the worlds of traditional Jewish observance and the cultural cornucopia of secular society is an insistence upon celebrating Shabbat while also availing ourselves of shows, concerts and other local offerings. In other words, we want to be part of the wonderful world at large even as we honor the restrictions that are part of a religious life.

What this typically means is a mad dash to purchase tickets before the advent of the Day of Rest and being able to walk to the venue and back to one's hotel from sundown on Friday to sundown on Saturday. It means figuring out what to do for Friday night dinner; it means museum admissions secured ahead of time so that a Saturday visit can take place. It also often means a tote bag or knapsack filled with snacks so the day of adventure can unfold without compromising any of the Sabbath day restrictions on making purchases.

Depending on one's denomination, all kinds of creative solutions may be found and the season greatly impacts this experience as the long days of summer provide the opportunity for Friday evening travel before it gets dark and the short days of winter mean that secular Saturday night endeavors can begin as early as 5 p.m.

Whether one carries a credit card that is used only until sunset on Friday or just after sunset on Saturday has to do with the willingness to interpret the law in a flexible way. Still, the pursuit of this ideal binds all Jews who seek that precarious balance between the spiritual and the secular.

Grabbing a local fall going-out guide from the rack of tourist brochures in the lobby of the Colonial Inn this past Friday, I impatiently perused a plethora of uninteresting holiday offerings until the very item I had been seeking came sharply into focus.

"There's an 8 p.m. performance of Evita at The Umbrella tonight," I happily informed HOBB, breathing a sigh of relief. The Umbrella is a new arts collective and performance space that occupied a local elementary school, just a five minute walk from the Colonial Inn. After settling into our room, we could buy our tickets online, light Shabbat candles in the bathroom, read, go down for dinner in one of the hotel's restaurants and leisurely make our way to The Umbrella...a most perfect way to start our weekend vacation.

We had driven to Concord as a spontaneous, last-minute weekend vacation after a fall of unusual work-related stress.  In the days following Middle Babe's wedding at Greentree Country Club in New Rochelle on August 28th, I longed for a period of calm that never quite arrived; in fact, it seemed that the end of the wedding ushered in a season of new challenges, extending an unfortunate trend of dealing with difficult and unreasonable personalities.

After a charming overnight stay in Philadelphia the week before, we spontaneously opted for another great American city for the Thanksgiving holiday weekend. With memories of many marvelous restorative winter vacations in the area, of hikes around Walden Pond and visits to the local cemetery where many of the great transcendentalists are buried, I instantly went online and booked the last available room at the Colonial Inn.

Our room was as quirky, old-fashioned, overheated and quaint as I had hoped...complete with beamed ceilings and slanted floors with broad wooden planks. We happily unpacked, set our Scrabble set on the bed as we readied to go downstairs for dinner, uncorked the excellent Borgo Reale Pinot Grigio we had brought from Manhattan and began our long awaited Day of Rest.

After a short traipse through the magical snowy streets of Concord a couple of hours later, mellowed by the wine and the Louisa May Alcott landscape, I sat in the auditorium of the new community arts center, utterly enchanted by the surprisingly professional and inventive production of the show I had last seen 35 years earlier when it opened on Broadway, starring Patti Lupone.

There are the shows we are conscious of loving, the shows whose scores we sing in our heads, the shows whose themes seem intertwined with our lives. West Side Story; Phantom of the Opera; Little Shop of Horrors; The Lion King; The Rocky Horror Show: Hair: Jesus Christ Superstar; The Sound of Music and Fiddler on the Roof top my personal list.

Over the course of my life as a parent, part of the joy of loving -- and sharing my love of -- certain musicals has been my penchant for speaking in lyrics or dialogue to my kids and certain trusted friends. The snide, "What do you mean by that?" from "Pontius Pilate's Song"in Jesus Christ Superstar has been one of my popular refrains. "She asks me why I'm such a hairy guy," from Hair has peppered conversations about the need for waxing. "Very smart Maria, very smart!" snarled by Anita in West Side Story has been employed as a way of defusing criticism.

Sitting in The Umbrella abuzz with excitement -- singing every lyric along with the actors in my head -- I recalled how much I had loved Evita and wondered why it slipped from my consciousness, especially since the sarcastic "Oh but it's sad when a love affair dies," has escaped my lips a few times and "I kept my promise. Don't keep your distance," has also been known to be on my spoken lyrics list.

I remembered how I had excitedly bought the cast recording on cassette after the show and how I sang along with it together with my sister, a musical actress. I recalled how insulted and stung I was when a critic from The New Yorker (or maybe it was the super-nasty John Simon of New York Magazine?) made fun of the lyrics, which I thought were great.

I also remembered that I had seen Evita just before I left for Hebrew University for my junior year semester abroad; my parents presented tickets to the show to me as a gift before I left home. For a city college kid, leaving the country for a year abroad was a big deal, especially for my parents who had insisted we live at home and commute to school. For the oldest daughter of a rabbi who changed careers just two years earlier -- becoming a clinical psychologist, borrowing money to buy a house for the first time, working around around the clock to earn enough to pay his friends back and keep his three children in school -- it was a big expenditure as well.

All this I thought of on Friday night in Concord, Massachusetts, in the auditorium of The Umbrella, 35 years after the fact. "This is very good," HOBB whispered to me as each actor debuted, their sweet and strong voices carrying the music of Andrew Lloyd Webber. I nodded vigorously, staring at the stage in a state of rapture.

Somewhere in the middle of the show-stopping number "A New Argentina," I nearly cried out with an emotion that blended revelation, joy and shock as I realized that the young bearded actor I had seen 35 years ago playing the narrator Che Guevara revolutionary on the Broadway stage was none other than he who played the avuncular, grey-haired Saul Berenson of "Homeland," a show HOBB and I follow with a passion that borders on religious devotion.

"Ari!" I whispered in a hoarse voice. "I just remembered that I saw Mandy Patinkin for the first time in Evita! How crazy is that?"

"What?" he whispered back, unable to hear me above the swelling, soaring music.

"I'll tell you later!!!" I whispered, sitting alone with my mind-bending realization, wrapping myself in that most universal human experience -- the stunning experience of past and present blending, the sensation of standing still while being hurtled backward through the tunnel of time.

As often happens when I return to a cultural touchpoint of the seventies -- the movies Carrie, Annie Hall and Taxi Driver, the music of David Bowie and Donna Summer, Laserium, shag hairdos -- I recall  the pre-cyber era. I remember a world before we were points along a worldwide GPS grid, a focused world before the habit of distraction, a wide-open world before it was possible to find just about anything within seconds by staring at a screen, a sincere world where "virtual" and "text" had far different meanings, a world strictly of the here and now.


I remembered the seventies buzz about Mandy Patinkin, his super-Jewy bonafides -- the Yiddish, Hebrew and cantorial songs he had performed, the Old Testament appearance, the name -- and the communal pride that "one of us" had again made it to Hollywood, the Broadway stage and great stardom.

In truth, I didn't think about him much over these intervening decades until I became obsessed with Homeland.  I knew he had other starring roles but he was off my personal radar screen until Homeland, playing the former head of the CIA and looking quite a lot like our friend, the best-selling author Rabbi Joseph Telushkin, at least according to Middle Babe, who introduced us to the show.

But being reminded of the 1979 production of Evita and of the spirited and youthful version of the actor now beloved to me as Homeland's wise yet weary Saul Berenson, I fell down a temporal rabbit hole as the 1979 Patinkin met up with the 2014 Patinkin...at least in my mind.

But mostly I wondered: how could it be that -- in the very same number of years that Mandy Patinkin went from newcomer to legend -- I feel exactly as I did at the age of 19, unformed, unaccomplished, focused, wide-open, sincere, eager to leave home for the first time and begin my own true journey?