The Adventures of the Would-Be Jihadists in Riverdale, New York

Riverdale, New York is about the least cool neighborhood in Gotham City.

Straddling the Henry Hudson Parkway just north of Manhattan, it is a mess of mismatched apartment buildings, pre-fab townhouses, senior facilities, private schools, depressing stores and shopping centers where, incongruously, gorgeous and often palatial private homes adorn the bank of the Hudson River or slouch self-consciously a couple of blocks over, to the east of the Parkway.

There are no groovy hangouts, no hip nightclubs, no restaurants that could properly be called destinations. But Riverdale has Jews, and lots of 'em. There are at least at least three thriving Orthodox synagogues, a bustling Conservative one and even a Reform Temple. Though badly in need of renovation, there is also a Jewish Community Center. There are at least two Jewish day schools and a new Jewish high school. I've heard rumors that there is a Reconstructionist congregation.

The largest senior facility has the word Hebrew in its name, there are kosher pizza places and Chinese restaurants and delis and butchers and bakers and even a Dunkin' Donuts shop under rabbinical supervision.

It's a bit of Jerusalem on the Hudson, Riverdale is; the kind of place where Saturday afternoons bring the local yidden out on the streets in Shabbat garb -- gaggles of formally-dressed kids running in tandem, families strolling in their finery, elderly couples in dignified shuffle.

Still, unlike Brooklyn, Riverdale is not on any subway line, not the kind of neighborhood one is likely to stumble onto by accident. It is a drive-thru community, a passageway from Manhattan to Westchester or Connecticut, a place that doesn't have a quaint and cozy center.

So it is therefore extremely puzzling to learn that of all the New York communities renowned for being Jewish, Riverdale was being targeted by a gang of would-be terrorists from Newburgh, NY.

As the news of the foiled plot hit the airwaves, complete with the details of a bomb set to detonate outside of the Riverdale Temple and the Riverdale Jewish Center, where HOBB and I proudly sat in the sanctuary, just three weeks ago, to hear Little Babe play cello in his school's Yom Hazikaron presentation, it struck me as exceedingly odd.

If one was going to strike a blow to the heart of the New York Jewish community, Riverdale would hardly be the place. My own nabe -- the Upper West Side -- or Boro Park, Brooklyn or the Upper East Side or Forest Hills, Queens or any number of Long Island and Westchester communities have higher Jewish visibility.

While it is a vibrant, important and Jewishly-dense area, Riverdale is more akin to the right arm, not the vital center of the community.

And unlike the Hebrew Institute of Riverdale, which is located along the Henry Hudson Parkway, the intended targets of this particular plot are located within the grid of inner streets, hardly the kind of place a Jew-hating terrorist might stumble upon accidentally.

Begging the question -- how did they know?

Yet, this was not the first time that Riverdale was under terrorist threat in recent years.

And by the light of day, puzzlement morphed into another emotion -- uneasiness -- as new emails filled my Inbox. Several contained links to news stories about the foiled attack. One was from the principal of Little Babe's school in Riverdale. It offered a recap of the story and news from the police briefing that took place last night.

The FBI acted in an exemplary way, infiltrating the terrorist cell, the situation is now entirely under control, the email explained. There is no heightened threat to the children or the community.

The words were intended to reassure the parents of the nearly 1000 Jewish kids who are scheduled to leave the safety of their homes this morning, like any regular school day. And news articles now carry an "all's clear" message from Mayor Bloomberg.

Unlike terrorists, swine flu doesn't target Jews, though the first New York City fatality of the virus did turn out to be Jewish.

In a free-associative, crazy-person kind of way, this seems like a premonition of sorts as I prepare to wake up Little Babe and get him ready for school.
Posted by Shira Dicker at 11:52 PM 1 comment:

Sunday Night in May with 'Mockingbird' and a Calligraphy Brush 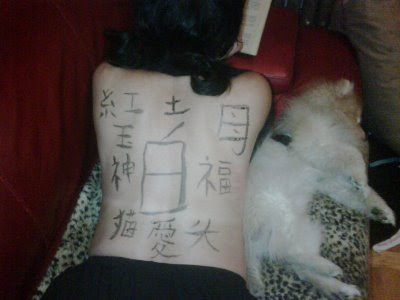 Here is a slice of the life of Bungalow Babe in the Big City:

Last night, at 10 pm, tired of reading To Kill a Mockingbird, Little Babe handed me his tattered paperback copy.

"Could you read me the last chapter of Part One?" he yawned/asked.

Being that I had just returned from the gym five minutes earlier, which capped off a 12-hour marathon of activity, which began with an early morning breakfast on Long Island, included a three hour cleaning frenzy at our actual upstate bungalow and had just concluded with a 45-minute session on the elliptical trainer with the music of the Go-Go's blasting in my ears, I must admit that reading out loud to my youngest child was not what I had in mind.

Evidently, my feelings were written all over my face. But Little Babe knew how to sweeten the deal.

"I'll do Japanese calligraphy on your back while you read to me," he offered.

So, for the next 20 minutes or so, while I retold Harper Lee's timeless tale, Little Babe dipped his calligraphy brush into ink and drew on the canvas of my back. The tickling touch of the brush was totally relaxing, the perfect end to a hectic day.

Sensing an opportunity, Alfie the Pomeranian curled into my side while his sister, our year-old pup Nala, watched respectfully from the floor.

Time superimposed itself onto place resulting in this moment: a fortysomething American Jewish woman in 21st Century Manhattan reading a novel based in the American South of the mid-20th Century while her young teen son draws Japanese pictographs on her back.

Nearing the end of Chapter 11, the insult hurled at Atticus Finch -- "Nigger-lover!" -- tasted foreign and uncomfortable in my mouth, a dusty vestige, long ago but not too far away.

Not so far away indeed that when Scout landed a punch on Francis's foul mouth, the blood on her fist felt warm on my own hand and the beating that she got from her uncle was as tangible as the breeze from the open window of my apartment drying the ink on my naked back.
Posted by Shira Dicker at 12:15 PM 1 comment: