Love is a Hamburger...or The View from Mt. Fuji 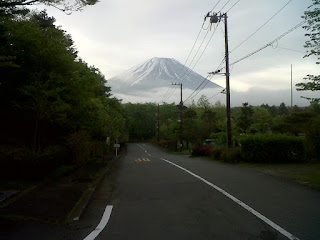 This has been an unusually eventful week.

Earlier this evening I arrived home after a five-day trip to Japan, which took me to Mt. Fuji and Tokyo with Neshama Carlebach and Josh Nelson for the 9th Annual Symphony of Peace Prayers conference, a global gathering of peace activists and religious leaders.

To say that my Japanese adventure was extraordinary is an understatement. I spent several days in the company of remarkable people of various faith communities who had gathered to create momentum for the prospect of peace in our lifetime. I heard their life stories and their life's work. We shared meals and programs and bus rides and a large-scale public event this past Sunday where Neshama offered her prayer for peace -- songs by her father, Rabbi Shlomo Carlebach -- her husky/sweet voice filling the open field, drizzling down like honey on the thousands of people who had gathered for the event, faces and palms uplifted.

The multiple gifts of Japan overwhelmed me. In particular, I was touched deeply by the grace, hospitality and warmth of the Japanese people. The patience I saw reflected in the postures of the assembled on the grass of the Mt. Fuji Sanctuary was a lesson for this antsy New Yorker.

While deeply stirring, the program was overly long. Looking across the field, I was impressed by the ability of the Japanese to be fully present even as I was agitated. They had come to receive a blessing. They accepted it in its fullness.

Though the trip was filled with encounter groups and discussions, I was also able to eke out time for solitary exploration, walking in the misty early morning in the Mt. Fuji region, exploring Tokyo by myself on my final day in Japan.

Even when I crave solo adventure, I often have to overcome an initial resistance to setting out on my own in an unfamiliar setting. Perhaps my reticence is rooted in safety concerns. On this trip, as always, I delayed my departure a bit -- both in the Mt. Fuji region and in Tokyo -- finding activities to do, such as answering non-urgent emails from the safety of my hotel room, but was immediately rewarded for my spunk within seconds of setting out on my own.

Hitting the trail in the Japanese mountains, I filled my lungs with the sweet fresh air and my ears with the songs of unfamiliar birds. Walking along a road, I passed a steady stream of Japanese hikers, running slowly but steadily uphill. Many were not young. We bowed to each other as we passed.

Having glimpsed Mt. Fuji between the trees in the early morning hours, I now have a new understanding of the concept of awe-inspiring.

Personified as "shy" because of the overcast skies in the region, Fuji put me in mind of Mount Sinai. Even to look at the photo I took during my morning walk revives that sense of wonder I felt when the mountain unexpectedly came into view.

The Sinai-ness of Mt. Fuji moves me deeply for I arrived in Japan on the heels of the festival of Shavuot, still touched by revelation and Moses's ascent up the mountain to commune with God and the Children of Israel assembled fearfully below.

As for my Tokyo journey...I had a moment of sheer panic standing in the Shinagawa train station just shy of 9 am. All around me, Japanese people strode in business attire and businesslike pursuit while I stared at the multiple gates, entrances, subway lines and options.

What if I get lost and miss my limousine ride to Narita Airport, I thought. What if I miss my plane back to New York? It was certainly a possibility.

But my craving for the experience of walking through downtown Tokyo drowned out my reticence and I soon figured out how to buy a 160 yen ticket to Shibuya...and was on my way, riding the subway, exploring the streets and shops and singing at a karaoke club and buying a pastry and soaking in the sights and smells of this sweetly kinetic city.

Since landing at Newark around 4 this afternoon I went through various phases of exhaustion but valiantly pushed through in an effort to obliterate my jetlag.

Now, well after midnight, I am astonished to find myself wide awake.

My mind is racing.

And my soul is restless.

So much has happened over this past week that I require consciousness.

Indeed, what jolted me out of bed (where I had retired in a reasonable quest to fall asleep two hours ago) was the sudden realization that exactly one week ago TO THE HOUR I had stood on the stage at the JCC in Manhattan's all-night Tikkun Leil Shavuot -- a festival of teaching and culture that honors the Jewish tradition of staying awake to study Torah on the first night of Shavuot -- performing the World Premiere of my one-woman show, The Rabbi's Girl Presents: Songs of Religion and Rebellion.

My performance was ambitious and experimental, messy and magical, the first public presentation of a concept I hope to perfect and produce in many venues around the country and even the world.

I am a writer -- not an actor -- and am filled with retrospective awe and horror that I had the nerve to perform an autobiographical show, with songs and dance, in the middle of the night on the Upper West Side of Manhattan.

My audience was robust...and kind. I saw people smiling and laughing and clapping hands. Some even got up to dance with me.

From the vantage point of a week, I am incredulous that people came to see me sing, dance and tell my story -- of growing up religious in an age of rebellion, a rabbi's girl in the 1970's.

The following morning I awoke to equal parts relief and giddy joy. In truth, I had been in a state of semi-hysteria prior to taking the stage.

A large part of the hysteria came from the realization that shortly after my show I would be heading to Japan.

And now this extraordinary week has come to a close.

The performance is past. I am back from Japan, sitting in my dark living room as if I had never been gone, Alfie and Nala the Pomeranians at my feet.

I am dazzled and dazed by what has taken place within these past seven days.

Yet, a side effect of solo travel when you are part of a family unit is the rough re-entry.

Telling the Three Babes about my adventure -- Big Babe and Middle Babe by phone; Little Babe at home -- filled me with a peculiar melancholy and I realized I missed my family on my trip.

Having an adventure of this magnitude without them made me feel oddly alone, though my very aloneness was exhilarating...most of the time.

But HOBB made me hamburgers for dinner, heeding my one complaint about Japan: as a kosher observer who doesn't eat white rice and avoids MSG, I found very little to eat during my journey.

"What is your dream dinner?" HOBB asked when I called him early this morning from my room at the Tokyo Prince Hotel where I was cranky and uncaffeinated and procrastinating about setting out to explore the city.

I hardly had to think.

And that is exactly how HOBB welcomed me home -- preparing large and juicy hamburgers, a delicious, white-rice and MSG-free vegetable and tofu stir-fry and decorating the table with the largest bottle of Gulden's mustard I had ever seen to ease my bumpy return into the atmosphere of my family, which is two seasons away from becoming an empty nest, which is morphing into a new entity I have never really known -- a universe of just me and HOBB with beloved but grown children who have embarked on their own journeys and now come home just to visit.

Posted by Shira Dicker at 1:26 AM No comments: