Oy Story...or a Twist on the Gift of the Magi 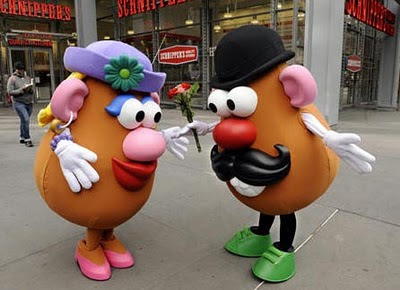 The Urban Bungalow is littered with Dave and Buster's paraphernalia, owing to Middle Babe's penchant for patronizing the place with her friends.

For the past couple of months she's been home from college I admit I've been curious about Dave and Buster's since she has described it as a nocturnal playground, an Eden of alcoholic drinks, arcade games, hoops, upbeat music and jolly youngsters.

Having stumbled into the Dave and Buster's at 9:45 pm at the Palisade's Mall this past Sunday, I can vouch for the aptness of the observation that one man's heaven is another man's hell for no place I have recently visited has made me want to run screaming into a forest populated by hungry bears like Dave and Buster's.

But why would a groovy chick like me even find herself at a suburban mall on a Sunday night, you might ask?

The answer is possibly even more disturbing than the fact that I was wandering around a mall at night to begin with: to see the 10:05 pm showing of Toy Story 3. In 3D.

Reader, this was not my idea.

You see, we were en route back to the urban bungalow after an intensely wonderful weekend which was capped by a Sunday night barbeque on the lawn of our bungalow with Middle Babe and her GC (Gentleman Caller).

With Alfie and Nala the Pomeranians taken care of my our daughter and her GC for the evening, we had the same thought: "Screw Manhattan movie prices! We're stopping to see a movie on the way home!"

The thing was, by the time we cleaned up dinner, packed up our stuff and got on the road, it was already verging on 9 pm. Though readers of this blog can attest to my penchant for partying like it's 1999, with HOBB at the wheel of our Honda, I started drowsing off, exhausted by my weekend warrior workouts, my hostess duties and the relentless heat.

Positive that my husband was likewise anticipating nothing more adventurous than climbing into our bed back in Manhattan, I was positively SHOCKED when he pulled off 87 at the Palisades Mall and cheerfully announced our night activity -- the next showing of Toy Story 3, which he was dying to see as Middle Babe gave it a rave review.

Loathe to be a party-pooper, I weakly agreed that this was a fabulous idea.

The Palisades Mall is a nightmarish work of architecture designed by a descendant of the Marquis de Sade. It has an industrial feeling to it, like being inside a gigantic warehouse held up by scaffolding. The construction also has an aura of instability to it, looking like oversized metal Lincoln Logs. This brings to mind the possible existence of a giant and malevolent toddler, bent on destroying the entire structure ANY MOMENT NOW.

Late on Sunday night, the place was deserted with the escalators stopped dead in their tracks and only the ghostly movement of elevators moving up and down. Most of the retails shops were long closed, a good thing considering the freakish window displays. There was a store hawking the world's most hideous evening dresses and gowns; another one carrying fake-looking artifacts from Africa, India and the Philippines.

"Can you imagine being locked inside this place, overnight?" I whispered to HOBB as we searched for the movie theatre. "It's a great premise for a slasher film. Those dresses could come to life and strangle us."

In addition to the Loew's at the mall, the chain restaurants were open. Included in this group was Dave and Buster's -- which we wandered through like a pair of stoned and anguished tourists -- and Friday's, where we had the super-relaxing experience of sitting at the bar drinking tea and really horrendous coffee while a Beyonce song blasted, followed by some unrecognizable rap/disco rant thing.

Finally, the time came to see our film.

Nudged into fake wakefulness by the caffeine, we presented our tickets, were awarded with Al Maysles-shaped 3-D glasses and rushed into Theatre 11...worried that we would be relegated to the front row due to the overflow crowd. Instead, we found ourselves gaping at the grand total of 9 other movie-goers who also had the weird inspiration to see this kiddie flick at 10:05 at night.

We grabbed two perfect seats in the dead center of the auditorium. After an interminable presentation of previews of children's movies, Toy Story 3 began.

The good news is that the film was diverting, even creative and touching in parts.

The sad news is that I was the only one who actually saw it. About ten minutes into the film, HOBB fell asleep, waking up only to briefly share the popcorn I bought midway through.

Since he was yawning mightily as we left the theatre, I took the wheel on the drive back to Manhattan, instructing HOBB to keep up his end of the conversation so that I would not fall asleep.

And as I drove down 87 into Westchester County, I felt HOBB beaming with pride...and satisfaction. Correction. Beaming? He was positively gloating. In fact, he was GLOWING with pride. He was radioactive. I looked towards him quizzically.

"You know, I didn't really want to see a movie but I knew how much it meant to you, so I decided to give you a treat," he said.

"What?" I fairly shouted. "Are you nuts? I slept the entire way here! Yeah...I wanted to see a movie FIVE HOURS AGO...not at 10 pm! And not a baby movie!!! I almost shot myself during the trailers! You've got it backwards...it was ME who didn't want to disappoint YOU!"

HOBB sat silently, stunned. And then burst into laughter. Which I had to join, of course, because I thought about the past few hours -- the hell of wandering sleepily through the carnival ambiance of Dave and Buster's and drinking bad coffee at the uber-loud Fridays and having HOBB sleep through a kiddie movie that only he wanted to see in the first place.

Yeah, our entire evening had been utterly ludicrous but also very sweet. And kind of epic. Like The Gift of the Magi or something out of a Chasidic tale.
Posted by Shira Dicker at 11:22 AM