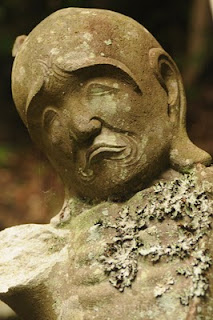 One week ago, it was just becoming clear that the massive earthquake in Japan was but the first of many calamities. Indeed, over the past seven days, the Japanese people have been subjected to disaster, death, displacement and danger on an unprecedented scale.
It is unoriginal and even perilous to term the devastation in Japan biblical but that is the description that comes closest. The suffering is so widespread, extreme and holistic that it appears wrought by a wrathful God.
Unlike accounts in the Bible, however, there is no indication of an egregious sin committed by the Japanese people to provoke such vengeance, no prophet of doom who provided a warning or chastised the population to repent. Whether one concludes that God is involved or not, the disaster in Japan occasions questions about God's existence (or inaction) in the face of such complete devastation.
To paraphrase Rabbi Harold Kushner, it is entirely appropriate to ask why such a bad thing happened to good people. Indeed, Rabbi Kushner's comments are included in a rather nice feature that CNN's belief blog put together on this topic. It is available here.
My personal theology places God at a remove from such events but I would be lying if I did not admit to an attempt to intuit God's motive or presence in all of this. Certainly, such questions are evoked by contemplation of the Shoah or other acts of man's inhumanity. Walking home from shul yesterday, I found myself committing a moral and intellectual misdeed: comparing the suffering of the Japanese with that of the victims of Hitler's Final Solution.
Though I take arms against the penchant to compare calamities, thereby robbing each of its uniqueness, I could not banish the thought that last week in Japan, Nature became a Nazi, hellbent on wiping out an entire nation through various acts of breathtaking cruelty. Perhaps thinking "Nazi"when contemplating inhumanity is a reflexively Jewish act, or maybe the word has just become shorthand for ultimate evil.
Inevitably, though, instead of feeling the sting of God's absence in the face of murderous acts of human nature or Mother Nature, I imagine God's grief over His/Her inability to intervene in earthly events.
But if nature turned against this damaged planet of ours, focusing her fury on Japan, that still only accounts for two disasters -- the earthquake and tsunamis. The third disaster, nuclear, is entirely man-made.
It is the nuclear nightmare, more than Mother Nature's meltdown, that will haunt Japan for decades to come.
And speaking of nightmares, I have been quite unable to sleep over this past week. With HOBB away, I have taken to sleeping with my laptop next to me, waking up several times during the night to check the news. I am riveted by the scope and depth of this disaster. I am haunted by the images, the faces and the staggering facts. One day it is the children's plight that moves me to tears, the next day, it is that of the elderly. The sheer destruction that has taken place within this country is so enormous that I weep for that as well, for all that is lost, broken and shattered. Brokenness itself is something to grieve.
Watching events unfold in Japan, the world at large seems shaken on some fundamental level.
Though local, this is an event of global and historical significance.
And personal significance as well, for not very long ago, less than three years to be exact, I was the mother of the bar mitzvah boy with the Japanese-infused ceremony, complete with beautiful Konichiwa banners, fans and parasols -- and of course, sushi. On a sultry June morning in 2008, I sat proudly at Congregation Ramath Orah listening to my youngest son talk about shared values in Jewish and Japanese tradition. Please find the text reproduced below.
On the pages of this blog, my youngest child is known as Little Babe. The Japanese theme came out of a several-year-long obsession he had with Japanese culture, food, language and history that began with the cartoon show, Pokemon. The interest in Pokemon cartoons extended to its characters and cards, then morphed into a similar obsession with Yu-Gi-Oh. From anime Little Babe graduated into manga, the Japanese graphic novels. Shortly, our apartment became overrun with these volumes. After a year, Little Babe stopped buying manga in translation and began teaching himself Japanese from the original editions. That, in turn, led to the purchase of dictionaries, both paper and digital, various CD-based language programs and eventually, the hiring of a tutor. Little Babe spent his spare time and money in Japanese markets and shops such as Mitsuwa in Edgewater, NJ and Kinokuniya in Manhattan.
It was a pleasure planning a bar mitzvah that catered to my son's Japanese passion. At the time, I put up a special blog, which is available here. In response to the Japan disaster, Little Babe is currently spearheading an effort to produce a fundraising concert in New York. A gifted musician, he will perform and will be inviting other teen groups to share the stage. The date is currently April 10th, the venue TBA. I will post more information as it becomes available. In this effort, he is working in cooperation with the remarkable SAR High School in Riverdale as well as the Joint Distribution Committee.
Please write to me if you want to get involved in any way.
As promised, here is a portion of Little Babe's bar mitzvah speech, which provides inspiration and one more reason, beyond the humanitarian, for Jews to jump to the support of the Japanese victims of this many-pronged disaster:

In other words...thank you all for coming to my bar mitzvah.

You may have noticed by now that I'm interested in Japanese culture. I even wanted to wear a kimono while leining but for some reason my parents weren't into it.

I see symbols of Japan everywhere I look. Perhaps it was meant to be that my middle name is Shachar, or dawn, which commemorates how I was born at dawn, and is also reminiscent of Japan, the land of the rising sun.

You may not realize it but there are many things that Japanese and the Jews have in common. For one, they both have a feline national symbol. We of course have the Lion of Judah which adorns our own ark and stained glass windows here at Ramath Orah as well as many arks in other synagogues.

The Japanese have the monokie niko, the lucky cat, symbolizing wealth, happiness, prosperity and business. Japan and Israel comprise the bookend borders of the Asian continent, with Israel at the southwesternmost point in Asia, and Japan to the Northeast.

But perhaps most fundamentally, the value of honor, or kavod, that is so deeply ingrained in both value systems. This value is expressed in both cultures through the custom of removing one's shoes before entering certain areas.

Take my parsha (Torah portion) for example. I started out the parsha reading about Aharon lighting the menora. Try to visualize how glorious he looked while performing this service in the Temple. He was adorned with eight different kinds of the fanciest clothes, including a robe, an apron, a tunic, and a big fluffy hat. These clothes were quite colorful, with royal blue, bright red, and pure white. Every part of him was up and covered. Every part that is, except for his feet.

You would think Hashem (G-d) would have commanded the Kohen Gadol (high priest) to wear shoes of the fanciest kind, in fitting with the rest of his outfit.

But we know from elsewhere in Tanakh that G-d considered it more respectful to remove one's shoes in his presence. When Moshe was at the burning bush he was ordered to do so, as was Joshua in the presence of the angel. Indeed, the rabbis tell us that every Jew was commanded to remove their shoes before entering the Temple mount. The Talmud learns this requirement from the verse in Isaiah, where the prophet scolds the Jewish people, quoting G-d Himself as saying "Who asked this of you that you trample my courtyard?"

Why, you may ask, did G-d find it disrespectful to wear shoes in His presence?

I think we can learn the answer from our Japanese friends. From what I've read in manga, the reason the Japanese insist on shoe removal upon entering a home is because keeping your shoes on shows you're in a hurry to leave, just as keeping your coat on is rude even in our culture. Taking these things off shows kavod, respect, in that you're telling your host "I like it here in your home and I want to stay a while" I think G-d is telling us the same through the prophet Isaiah. Since the Temple Mount is where His presence, or shekhina, rests, the Mount is His home, so to speak. In hebrew we call it "Har Habayit", literally the mountain of G-d's house. Not surprisingly, G-d found it rude to appear as if you were in a rush to leave His home.

So we see there are some shared values between us and our far eastern friends. What accounts for this? If we assume that all spiritual truth originated with Abraham, how did some of this truth find its way to the far east? One theory is based on the narrative found in Genesis 25.

There, it tells us something that is not so well known: that Abraham took another wife named Ketura after Sarah had died, and they had six sons. We don't hear anything about these sons at all except the fact that Abraham "gave them gifts, and sent them eastward to the land of the east", or in Hebrew, he sent them "kedma el eretz kedem. "The rabbis tell us that the Torah does not waste words, so why does it repeat like this, "eastward to the east"?

One interpretation is that Abraham sent them literally to the FAR east, and that the "gifts" he gave them were the spiritual gifts of kaballah.

And so the Zohar says these children carried the spiritual spark of Abraham with them even though they would later forget where this spark came from. Avraham was told by G-d that he would be a "father of many nations" (Av hamon goyim), and we can see that his spiritual legacy lives on in many peoples. This idea, that everyone shares spiritual bonds in common, is a value my family has always stressed.

I hope to continue to embody this value in my own life, as I continue to explore Japanese, American, and of course my own Jewish heritage.