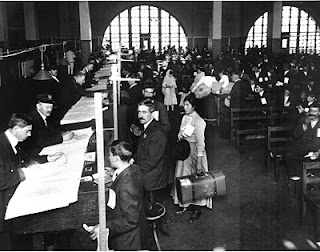 Eight years ago, I angered a British friend by referring to New York City as the Diaspora.

I was in London, researching the desecration of a synagogue in Finsbury Park. A hurricane of Jew- hatred had swept through the sanctuary, attended by mostly elderly Jews. Among the insults: a swastika scrawled on the rabbi's shtender, siddurim torn and tossed on the floor, glass broken, kippot and tallitot stewn about.

In the course of my reportage, I made two mistakes. First, I asked about the recent resurgence of anti-Semitism in England; secondly, I referred to myself as a Diaspora Jew.

My friend, a native Londoner, firmly set me in my place, telling me that European anti-Semitism has not returned for it never went away, merely hid beneath the surface in that wounded period after World War II.

Though shocked, I instantly knew that he was right.

And yet every now and again, as I navigate my Gotham existence, I find myself firmly implanted in the Diaspora.

For instance, this past Sunday.

Freshly returned from a Passover trip to Israel, sun-kissed and toned from hiking in Eilat, looking more Sabra than city slicker, I found myself possessed of a rare gift -- a free Sunday, due to the last-minute cancellation of a day trip upstate to retrieve our dogs from the friends who watched them in our absence (they decided to drive into the city and drop the doggies off for us), Little Babe's self-imposed study plans and HOBB's announcement that he would be spending the day in his office, catching up on work.

While I had an evening engagement in place -- a Yom HaShoah commemoration on the Upper West Side featuring Frank Blaichman, a partisan fighter and author of the new memoir, Rather Die Fighting, a project for which I am serving as public relations consultant -- several hours opened up to me, filling me with giddy delight and a small measure of panic.

What on earth should I do with my free Sunday??

After perusing the Weekend section of the Times and several NYC events blogs, checking my email, Facebook and MeetUp for invitations and events I had previously ignored and emailing a friend whom I've been trying to see for months, a glorious schedule fell into place: an early morning hike down to the JCC and gym workout, a planning meeting at a friend's place for an upcoming fundraiser, some brief local errands, a three-hour Lindy Hop and Charleston workshop at Dance Manhattan in Chelsea, a kamikaze assault on the H&M on Sixth Avenue, dinner with my friend at the Hummus Place back on the UWS...and the Yom Hashoah program at Ohab Zedek on West 95th Street.


While my day began and ended at Jewish venues -- a community center and synagogue -- it is the substance in between that lends it a distinct Diaspora quality.

In Israel, on Yom HaShoah, there are no dance classes, no music classes, no lite recreation or frivolous entertainment.

In Israel, on Yom HaShoah, the television stations broadcast programming dealing only with the Holocaust.

In New York, on the Sunday of Yom HaShoah, the city hosted hundreds of commemorations for Holocaust Remembrance Day. Synagogues, museums, schools, institutions and community centers offered lectures, films, exhibitions, book talks, the Reading of the Names and other programs in the spirit of the day.

In tribute to its Jewish populace, the soul of the city observed a palpable moment of solemn silence and then the heart of Manhattan beat on, demanding streets streaming with citizens basking in the post-winter new sunshine, maintaining its staggering array of cultural offerings, adventures, opportunities and experiences, indoor and outdoor, high and low brow; artistic, athletic, educational, ethnic, retail, pricey and free-of-charge, multi-cultural, weird, wild, wonderful.

And when Monday arrived and I opened my reluctant eyes, my body felt the full imprint of the Diaspora -- muscles sore from my swing dance intensive, memories of the extraordinarily moving Yom HaShoah event etched upon my mind: a synagogue filled to capacity with children and adults alike, yahrzeit candles lit in memory of the Six Million, songs mournful and triumphant, the testimony of Frank Blaichman, Holocaust survivor, partisan hero, Jewish grandfather, resident of Manhattan.
Posted by Shira Dicker at 6:23 AM