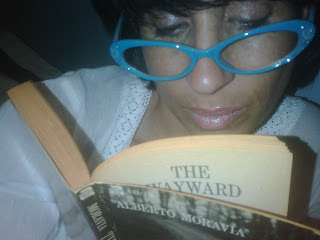 This is a portrait of obsession.

At the end of a frenetic NYC weekend, it all came down to me 'n Moravia.

And my cool Ricky's reading glasses, which trick me into thinking that they are just a fun fashion accessory and not a visual aid. Then again, their attractiveness is clearly only a matter of opinion. Earlier today, Little Babe told me that they make me look like a demented librarian.

Having read through the supply of Alberto Moravia novels and short story collections that is available on bookshelves and through special order at Barnes and Nobles, Book Culture and the Strand, I finally turned to Alibris.com, scooping up five hard-to-find titles in the equivalent number of seconds.

Over this past week, compact Jiffy envelopes arrived for me, bearing my printed paperback treasures. I could not believe the speed with which my desire had been fulfilled; tracking down Moravia's elusive works had become a stalker's pastime for me over the past few months and I had finally caught my prey. Avidly, I tore open the envelopes. The books tumbled out onto my waiting bed, possessed of lurid covers, aged to the point of crumbling.

I smiled at the volumes, welcoming them into the family of rag-tag Moravia editions -- some European, others American – I already possess, noting that my little library looked like a family of multi-racial adopted children who nevertheless all bear the same last name.

Earlier today, coming uptown on the #1 train, I finished the first edition 1950 hardcover copy of Two Adolescents that Big Babe found for me at a second-hand bookshop in Jerusalem over the Passover break. Breathless from Luca's dramatic denouement, I paused briefly for decency's sake, then greedily dove into The Wayward Wife.

Tonight, when the action moved to my bedroom, I thumbed through the book's credits and was astonished to discover that Philippe Halsman was the photographer.

This discovery brought me a sense of bashert -- the preordained -- for I had recently been obsessed with the Latvian-born Halsman, having seen the dreadful film, Jump, which was written around the true, astonishing and little-known story of his pre-celebrity life in Europe, when, as a young man, he was tried and convicted in Austria by an anti-Semitic court of murdering his father.

Having always admired Halsman’s stylish work, the horrific story of his earlier life consumed me, refusing to let me go. Learning that the Moravia cover was shot by him, my mind turned associative; the teen Halsman, languishing in an Austrian jail, became confused with Moravia’s adolescents Agostino and Luca, bound together by their common doom. Staring at the black and white cover photo on my book, I considered Halsman's ability to reinvent himself from wrongfully convicted killer to American A-lister, Life magazine cover photog, friend to the famous, creator of "jumpology" and the remarkable Jump portraits, one of the Ten Greatest Photographers in the World, according to a 1958 Popular Photography article. But Halman's dramatic denouement was not only the result of his talent and will. His pardon and passage out of Europe came as the result of a campaign by several high-profile individuals including Thomas Mann, Sigmund Freud and Albert Einstein. Life magazine extended a cross-Atlantic invitation to him. As I pondered the personal and outside factors leading to Philippe Halsman's redemption, I felt a sense of keen regret that I had never met him, nor my beloved latest-favorite author. Yet instantly, that feeling morphed into one of supreme joy for wasn't I sitting in a midnight cafe with him and Alberto Moravia at that very moment?

It is now no longer Sunday night. The act of writing has, once again, burned off my extreme adrenaline-fueled agitation. I am horrified at the hour, noting that in a very short while, I need to jumpstart my professional week.

This Monday will be different from previous Mondays because of one remarkable detail of this past weekend: the two-day Open House I attended at the Columbia School of Journalism, where I am scheduled to begin my Masters program in Art and Culture Writing this fall.

And while I've known for the past month of my acceptance, it was not until this weekend that I actually embraced the fact of my impending studenthood, which brings with it the restructuring of my current professional life. And my personal life, in some ways. Absent for our Shabbat dinner on Friday night, I became a wayward wife, choosing to socialize with my classmates at Havana Central, coming home only after Little Babe had gone to bed and HOBB greeted me with baleful eyes and the rebuke that I might, at least, have come home to light candles and sing Shalom Aleichem.

This process is personal tikkun; long overdue. If there is one affliction I've suffered from over the past sixteen years, it is imbalance. The work I've undertaken has been ubiquitous, overwhelming, consuming. The writing -- my writing -- when it has happened, has felt like a miracle of sorts, the triumph of will over crushing responsibility, fatigue, the demands of family life. It has felt both heroic and woefully inadequate, not in essence but in volume.

My unwritten projects have bonded and formed a fellowship of their own, rag-tag, like my Moravia books. They patiently sit on my pending project bookshelf, feeling the fierce love of my gaze, my stewardship, my determination.

Like Moravia's books, they know they will not be neglected for they are my family. I have waited for them a long time; I am incomplete without them. I find my identity through nurturing these projects. They are mine. They are me.